The word menopause is one of those words that can be confusing. The way it is used on the street can mean so many things. Some women refer to it as a dreaded period in their lives where they were suffering due to hormonal shifts. Others use it to express that they stopped bleeding, and yet others mean the phase after they stopped bleeding. This is confusing as each one refers to a slightly different phase. What is it that we are actually talking?

Menopause is normal and natural

Let’s start with this: Menopause is a natural transition in a woman’s life. The emphasis being on natural. In other words, there is nothing inherently pathological about menopause in and of itself. In fact, menopause is not mentioned in the ancient, Ayurvedic medical texts anywhere. Sure, you can look up individual symptoms that are associated with menopause, such as depression, anxiety, weight gain etc. but menopause is not a separate category in and of itself. Surely, if menopause was a significant disease, it would be mentioned, wouldn’t you think?

Looking at traditional cultures menopause seems to be a non-event. Dr. Christiane Northrup and Dr. Svoboda, both respected teachers in the field of healthcare, both mention that women in traditional villages in Africa and Asia have no clue when asked about their symptoms around the Change. The I-Kung tribe of Africa Dr. Northrup visited has no word for menopause. The Japanese have no word for hot flashes.

Similarly, Dr. Svoboda reports that women in traditional Indian villages do not have any symptoms that are related to menopause. What Dr. Svoboda has observed, however, is that if women from those villages adopt a Western lifestyle rather than the natural, earth connected lifestyle of their traditional villages, they too develop menopausal symptoms as we know them in the West.

Now, just in case you are concerned, you are not doomed just because you live a Western lifestyle. You too can have an a-symptomatic menopause. Listen to Lisa Scouba’s menopause success story to get inspired.

The word menopause comes from the Latin medical term menopausis. The word men in menopause refers to month which is closely related to the word for moon, mene.  The word pauein means to cause to cease or stop. Thus, menopause is the natural cessation or stopping of the monthly moon cycle. In other words, it is a point in time when a woman has stopped menstruating. Typically, this is pinpointed after she has not menstruated for 12 consecutive months.

Now you may ask yourself, if menopause is a point in time why do many women refer to it as a period of time.  Well, there is actually various stages that lead up to this point in time called menopause and that is what most are referring to.

The four phases of Menopause

Let’s start with birth. Yep, we are going all the way back to the point in time when you took your first breath. That starts your journey as a woman. The period of time after birth is called pre-pubescent or pre-menarche, meaning the time before you were able to procreate. There is no bleeding or ovulation during this time.

Around the average age of 11-14 a girl starts bleeding. This event is called menarche. Menarche marks the entry into womanhood and our incredible, magical capacity as women to grow life in our wombs. I find this to be nothing short of a miracle. As women we have the incredible power to grow life, what a privilege and honor.

The time period after menarche is called pre-menopause or I suppose you could call it post-menarche, depending on your point of view. This is the time in a woman’s life where she is highly fertile. She is menstruating and ovulating.

This phase gives way to peri-menopause, a gradual shift from the body saying ‘Hey I am getting tired of this procreation cycle. Just wanna let you know that soon I will be done producing babies’.

Perimenopause can span 1-10 years,  science reports. This is the phase where most health challenges arise for women and the term tends to be used for those who experience discomfort. Although, we should remark that every woman goes through perimenopause, symptoms or no symptoms. There is not really a defined time when perimenopause starts but one could argue that it begins when progesterone levels start to drop at the age of 35.

Then, finally, menopause arrives.  It is the point in time when a woman has stopped menstruating. To be precise, it is defined as ‘not having had a period for 12 consecutive months’. After you have reached this point you are on a natural contraceptive for the rest of your life and can no longer naturally conceive a child.

Around the point of time called menopause, sex hormones see their most dramatic decrease which means that there is less of a buffer against physical or emotional stress. Many women often feel that they no longer are the woman they once were. And truth be told, they aren’t. This isn’t a problem in and of itself. The problem arises when we are attached to our old Self and don’t allow the new Self to arise to reflect this reality. When we keep doing things no longer appropriate for our current body’s abilities, we push, we stress and we don’t take care of ourselves skillfully, we are in bad luck. Continuing tactics from our 20s and 30s to cope with stress will lead our bodies into ill-health. The full steam ahead strategy is outdated. Skillful self care and wiser choices need to be part of the agenda. But I got sidetracked… let’s get back to the phases.

Post menopause is the period after a woman has stopped menstruating for at least 12 month. You are in this phase of your life until you die. It can comprise almost half of your life.

Now you might say, that gal is crazy. Why is she including the prepubescent time in a menopause discussion? Well, let me explain. By expanding our viewpoint from birth all the way to death we can see that menopause is nothing but a natural transition in a woman’s life. It is part of the natural cycle of life. Nothing to fear, fight or run away from, just another beautiful pulsation in the ebb and flow of life. 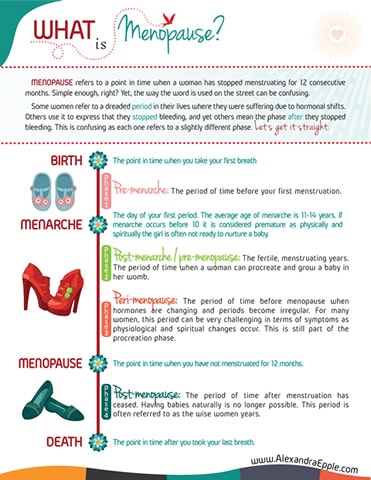 What to read next

What type of menopause are you?

Menopause: an opportunity not a travesty

What to listen to next